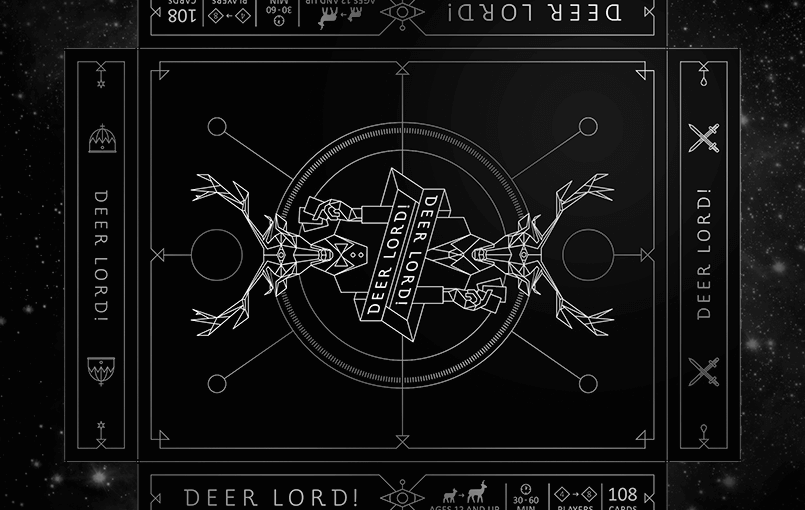 Production of our party card game is under way, and we know you’re all excited and curious about the looks of the final product (we sure are). Well, wonder no more, because here is the board game box design!

fawn over the design for our board game boxes!

First things first, the cover of the BASIC game: 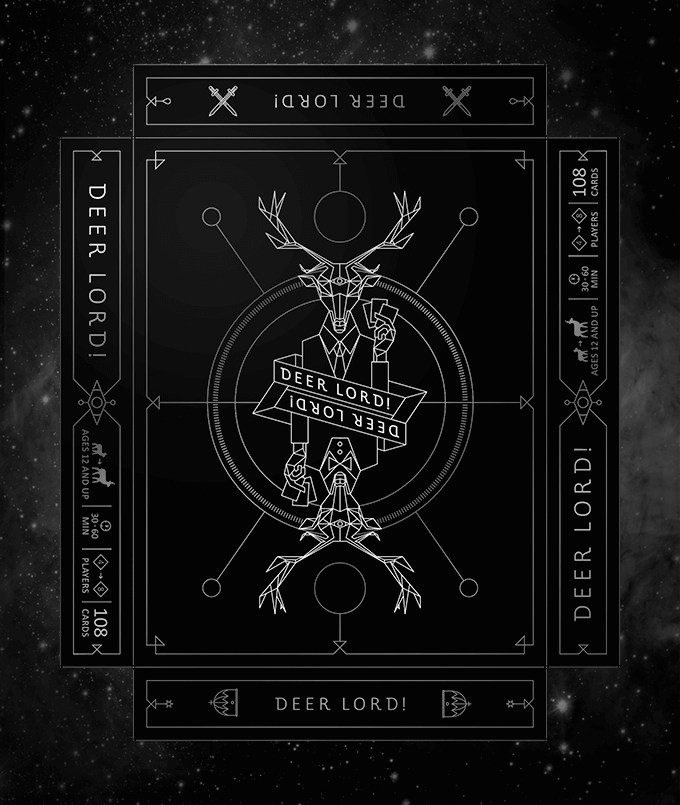 You might recognise the double deer, it’s the same as on the back of the cards. These fashionably conjoined twins will be printed white on black, and here’s the twist: all the other details will be finished in pantone silver, on all the boxes. Well, we DID promise exquisite boxes, didn’t we?

Flip it over and what have you got: 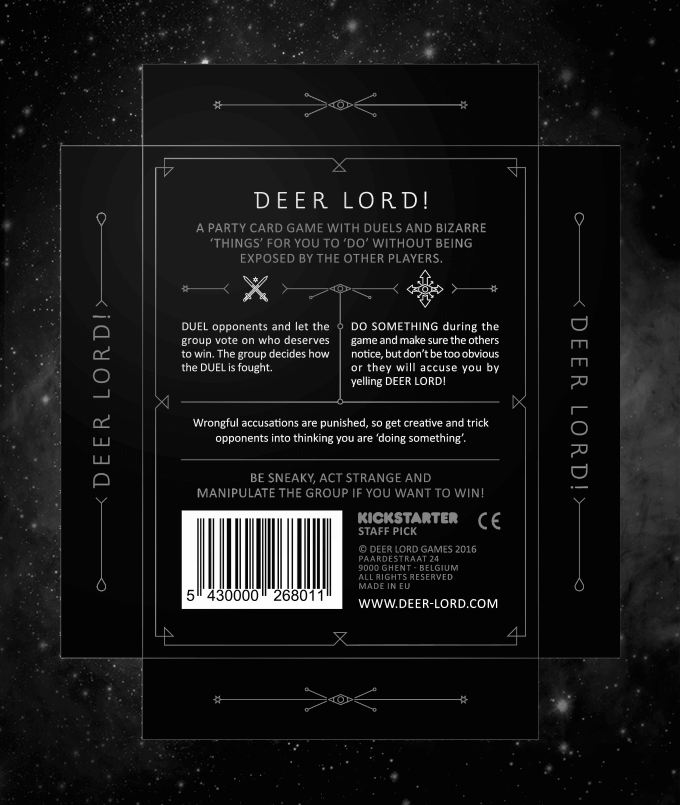 …all the necessary info (what did you expect?)

Now, on to some interesting alchemy!

There are 6 themes, geek, asylum, broadway, gangsta, flirty & mean, and a dressed-up Lord for every one of them.

Each expansion combines 2 of those themes and, originally, we wanted to feature a Lord on the front and one on the back… but we quickly ran into an important problem: the expansions include only half the number of cards as a basic game of DEER LORD, so the packaging is a bit smaller. Not half as big, just a little bit (the images are to scale). Still, where was all the necessary info going to go? We couldn’t very well just squish it on the sides, could we?

So we fused them!

…fused their powers of bling to become the cooliest of Coolios: 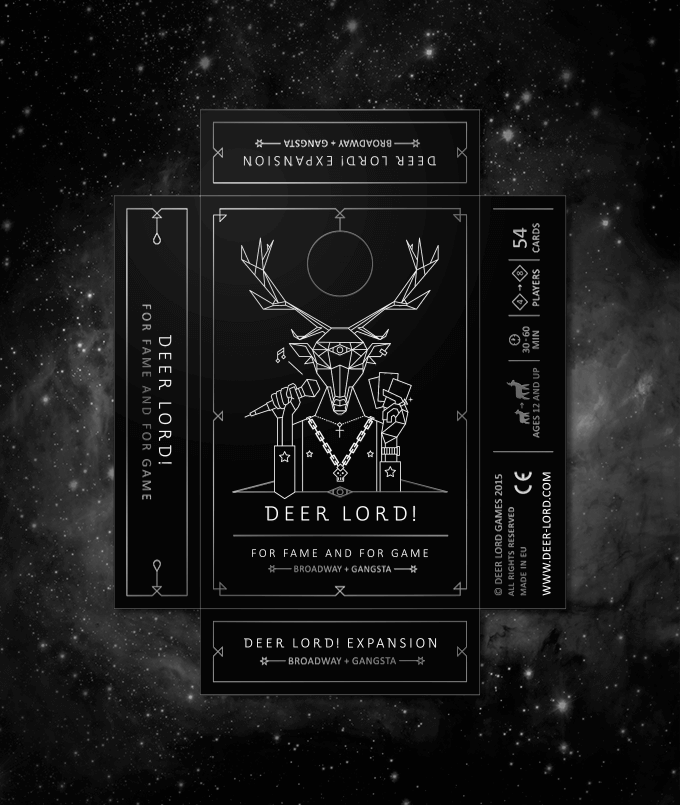 He kept the microphone, which he now uses for beatboxing and spitting rhymes as well as the occasional ballad. He loves gold and everything that glitters, so why not wear every piece of jewelry at once? He’s such a star player that he bedazzled his entire outfit with stars, even his peeping nips.

Deer Juan and that mean motherbucker… 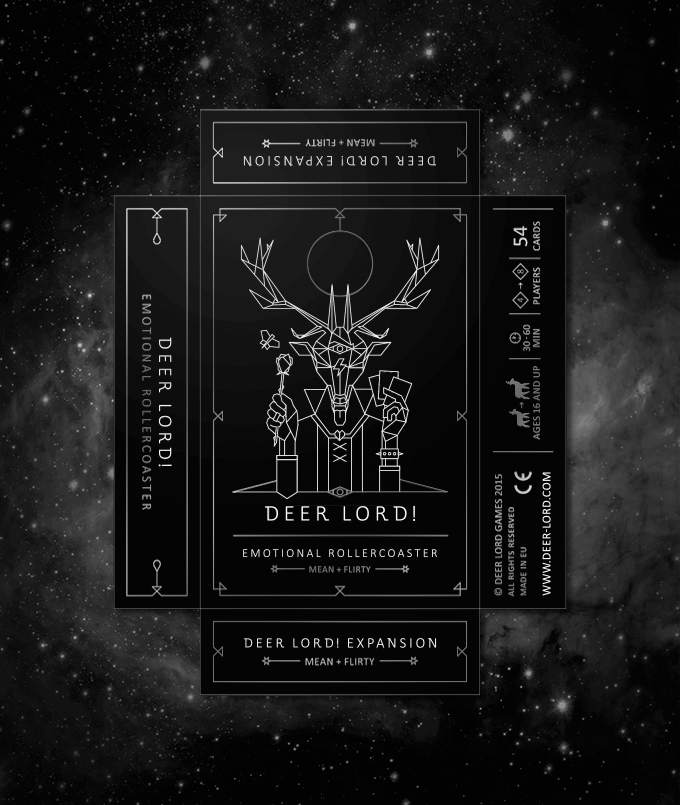 Don’t fall for his lies! This pretty bad boy wil seduce you, bringing you gifts and whispering sweet nothings in your ear, up until he stabs you in the back and rips out your bleeding heart. I’m trying to warn you, as a friend, don’t let him touch your heartstrings or he’ll use you as a puppet.

It was a little trickier to fuse this cute little geekazoid and Dr. Lordenstein…

With his geek chic glasses and high collar lab coat, he fits in any laboratory, not just evil ones.  Gloves betray his clinical approach. He only takes them off to salute other Vulcan-minded geniuses.

So there you have it, the board game box design for the BASIC game and each dual expansion. We bet you can’t wait to caress these magnificent boxes irl (if you ordered them that is…)

Special thanks to our talented designer Steven Derthoo, who slaved away tirelessly until they were perfect.

Did you love it? Detest it? Or did it leave your cold heart as untouched as ever? Let us know.

*no, fusion is not just a cheap tactic to make weak Lords stronger

2 thoughts on “board game box design!”