Discover why you should back DEER LORD! on Kickstarter

There’s some good in this world. And it’s worth fighting for. 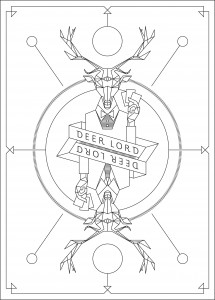 Sam and Karen are going all out in a beatbox duel. Meanwhile, Robin jumps on the table and declares himself ‘ruler of the ant world’. Alexander laughs while putting some cards in his mouth. Too late, Sam realizes his shoelaces are tied together. Down he goes…

[su_highlight background=”#1db95c”]DEER LORD! is a party game with bizarre things for you to do without getting caught by the other players… but be obvious enough for them to notice you or it won’t count! [/su_highlight] When others expect that you are ‘doing something’, they scream: ‘DEER LORD!’ from the top of their lungs, to sabotage you. But wrongfully accusing someone has negative consequences as well… In short, in order to win this game, one useful tactic is to act strangely to fool the other players. After a while, everything anyone does starts to look suspiscious. That’s when the game really kicks into second gear.

Besides ‘doing something’, you can also challenge other players to a head-to-head duel. These are ideal opportunities to ‘do something’ without others noticing. This goes for the players dueling, as well as the players watching. So everyone stays involved in the game, even when it’s not their turn.

[su_quote]After a while, even seemingly normal behaviour starts to look suspiscious. That’s when the game really kicks into second gear.[/su_quote]

We played DEER LORD! WITH HUNDREDS OF PEOPLE AND USED ALL OF THEIR FEEDBACK TO perfect the game

but the most convincing argument for DEER LORD!’s awesomeness is the unique game experience it brings to the table. It’s remarkable how a card game can have such an effect on people’s behaviour. Players will do things they normally wouldn’t even consider. It’s no secret that DEER LORD! offers the possibility to get to know people in a whole new way. Once you’ve played the game, you’ll know what we’re talking about. We have such faith in our product that we offer it for free. We know you’ll be back for more. You’ll all be back!

But sir, how can I get this wonder of human creation?