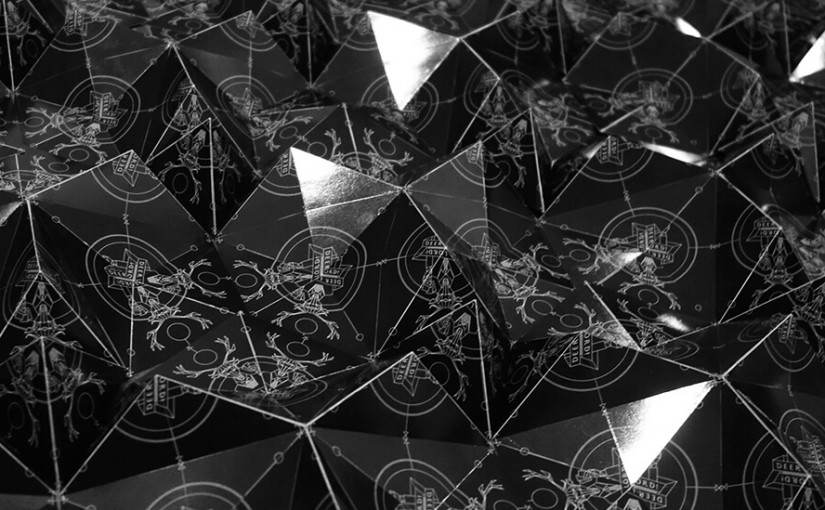 With our product launch coming up on April 1st, we were inspired to create this really cool 3D origami papercraft thing out of leftover materials. Let us show you how, maybe it gets your creative juices flowing too. Let’s make something out of nothing!

From start to finish (well, kinda):

Back in November, when our Kickstarter campaign was up and running, we had a bunch of postcards printed to serve as flyers to spread the word. Nice, glossy postcards with the double DEER LORD on the front and some relevant info on the back… which is completely outdated by now.

We sprinkled these all around town but about a month after the campaign was over, we noticed a whole stack of these still lying around.  Tragically overlooked. “Bummer! Such a shame! Let me get the shredder… or don’t?”

After much pondering and plenty of bad ideas, we finally found a way to recycle these old postcards into some gorgeous 3D origami papercraft artwork (there has GOT to be a better way to describe it). The process is simple, really, all you need is

*NOTE* the double symmetry of the DEER LORD graphic worked to our advantage beautifully, but you could use any print or color(s).

After trimming the border from each of the cards, we were left with just the graphic, nice and clean.

With a box cutter, we scored along the diagonals so they would bend neatly and easily. We did the same along the middle line, perpendicular to the long side of the rectangle, to make the final shape more flexible. It goes without saying that it requires a light touch with the box cutter, otherwise you’re left loose pieces that you need to tape back together (and you need to tape plenty of things as it is).

From this first batch of postcards, we cut out the bow-tied deer. Because it’s an isosceles triangle (had to look that one up), both sides line up perfectly. Stick ’em together with some tape (on the back that’s going to be hidden anyway) and you get a ‘spearhead’ shape, pictured above.

But of course we’re not just going to discard all those fashionably bow-tied deer, that would be crazy. So we stuck 3 of them together (tape tape everywhere tape) to create 3-sided pyramids:

These are going to be the connector pieces between the shapes of Step 4.

*NOTE* you could use 4 to create a more traditional pyramid shape, but those won’t fit in the final pattern.

Now onto the last component:

This time, we cut the postcard in 3 parts, as shown above. Shuffle the parts around, tape it all together, and you’re left with a kite shape with Siamese deer twins. Note that, because we’re dividing the postcards through the middle, the center circle always lines up beautifully, for the ‘kites’, ‘spearheads’ and ‘pyramids’. Hooray for geometry!

Because we scored along the middle of the rectangle with the box cutter, it’s really flexible and can be folded up almost entirely.

3 ‘kites’ and 3 ‘spearheads’ can be combined into one flexible, symmetrical shape. Combined with the pyramids of Step 2, you can create a self-repeating pattern that looks pretty spectacular.

We still have to do the final assembly on site, to create a mural that will serve as backdrop for the classiest selfie you’ll ever take, at our PRODUCT LAUNCH on April 1st.

Check back in a week to see the final result!

In the meantime, get busy and start cutting, taping, cursing and admiring your own upcycled postcard art!